University of Illinois at Urbana-Champaign, Ph. D. in Chemistry, 2019

University of Evansville, B.S in Chemistry and Physics, 2014 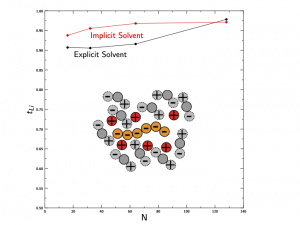 Increasing use of consumer electronics and electrification of vehicles has caused demand for lithium-ion batteries with improved energy density and charging rates to grow. As the charging rate for a lithium-ion battery increases, the fraction of the total charge available decreases, and increasing the transference number increases the fraction of total charge available for a given charging rate. However, conventional liquid electrolytes have lithium transference numbers less than 0.5, which indicates the anion carries most of the current.

I am interested in applying simulation and statistical mechanics to better understand soft matter systems, such as polyelectrolytes, coacervates, and organic semiconductors. Outside of work, I enjoy automobile restoration and reading.