Polyelectrolytes are an important and interesting class of soft matter. Their fundamental interest arises from the fascinating range of properties they can display.  For example, single polyelectrolyte chains are predicted to display a wide range of conformations including rods, globules, pearl-necklace structures, torii, and helices depending on the balance between electrostatic and solvent induced interactions and the local chemistry of the molecules.  Their practical importance arises from the large number of applications; the worldwide production of super-absorbent polymers alone was 850000 metric tons in 1999.  They are also important as biological molecules such as proteins, sugars, and nucleic acids. The study of polyelectrolytes therefore spans diverse areas and has seen active research

Polymer coacervates are composed of charged polymers (polyions), usually one positively charged species and one negatively charged species, their associated counterions, and added salt. They display liquid-liquid phase separation that is affected by many factors such as ionic strength, pH, the molecular weight of the polyions, and temperature. Coacervates can also be formed with protein/polymer and colloid/polymer mixtures, and with polyampholytes.

Coacervates have generated interest in various fields because of their diverse applications in coatings, adhesives, drug carriers, and functional membranes, where both phase separation and self-assembly play an important role.  The drive to create hybrid materials requires a chemically detailed understanding of the fundamental interactions and quantitative descriptions of, for example, the concentrations of the complex and supernatant solution, and conformational properties of the polymers.

Coacervates are also of biological importance.  Proteins and nucleic acids undergo liquid- liquid phase separation in cells and form assemblies or condensates that function as membrane-less organelles in cells. These organelles, such as nucleoli, Cajal bodies, and stress granules, have been implicated in a number of biological processes such as gene regulation, and signal transduction. These micron-sized spherical “droplets” are found throughout the cell and can concentrate nucleic acids and proteins, the latter in a sequence dependent fashion. It has also been suggested that they might play a role in the origin of life, because these droplets can form in the absence of lipids, and the nucleic acids could have promoted catalysis in the early universe.

We are studying polyelectrolyte solutions and polymer coacervates using computer simulations on multiple scales, as well as liquid state theory (integral equations and classical density functional theory).  Studying the same system at several levels of resolution allows us to reach long lengthscales and timescales while validating results at lower resolution by comparing to those at higher resolution.

A widely studied polyelectrolyte solution is sodium polystyrene sulfonate (NaPSS) in water.  One can think of several resolutions of models for this system.  The model that most faithfully represents the real geometry is that atomistic model.  In this model all the atoms of the polymer, as well as counterions and water molecules are represented as sites.  Simulations using this model are very computationally intensive, however, and not feasible for long chains.  The MARTINI coarse-grained model groups four water molecules into a single site.  In the traditional MARTINI approach, four heavy atoms are grouped into a single site, but for PSS we choose one site for the backbone, three sites for the ring, and one for the sulfonate group.

There are some surprises at this level of modeling.  For example, a single PSS chain is rod-like when all monomers are sulfonated (f=1) as expected, but collapses into a cylinder, not sphere, when the degree of sulfonation is decreased. 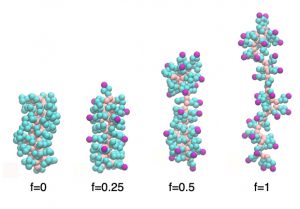 Further simplifications including replacing the styrene ring with a rigid bond, and by modeling the entire polymer as a linear chain.

Polymer coacervates form when two species of opposite charge are mixed. Of interest in this case is the phase behavior, conformational properties, and dynamic properties of the mixture.