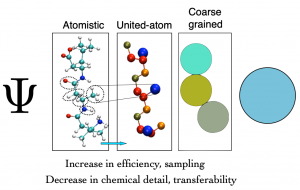 The choice of model depends on the problem and the relevant physics.  More detailed models more faithfully represent the physical system.  However, they are computationally intensive and cannot efficiently sample all configurations.  The process of coarse-graining results in a hierarchy of models that sample increasingly more efficiently, but are less representative of the system, and are likely to be less transferable to other conditions or molecules.

The starting point is the development of a fully polarizable atomistic model for the system.  In our group we use symmetry adapted perturbation theory (SAPT) based on quantum density functional theory (DFT) as a starting point and then empirically introduce additional sites and interactions to reproduce the behavior of hydrogen bonding systems.  DFT-SAPT has unique advantages for force-field development, including its inherent energy decomposition and prediction of non-covalent interaction energies with comparable accuracy to coupled-cluster.

The robust and transferable character of the SAPT force fields is largely due to the parameterization methodology, in which all asymptotic interaction parameters are obtained from monomer properties.  The static polarizabilities are converted to a shell-model (Drude oscillators), for ease of implementation in standard MD simulation packages.  Dispersion coefficients are then generated from the frequency-dependent polarizabilities, and the remaining force field parameters, namely short-range terms describing exchange-repulsion and charge penetration (and potentially charge-transfer), are fit to the residual of the asymptotic force field description and SAPT intermolecular interaction energies of dimer species. 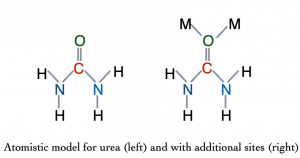 We develop a hierarchy of coarse-grained models using a “top-down” approach.  We vary the polarization and atomistic resolution of functional groups and parameterize the models using SAPT to the same DFT calculations.   The approach has been successful in the study of room temperature ionic liquids. 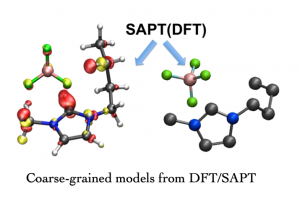 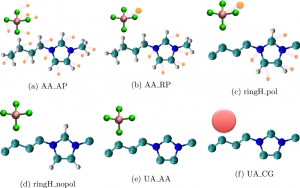 An alternative approach is to start with a heuristic simpler representation and adjust the force fields to reproduce experimental data.  In the MARTINI approach 4 heavy atoms are mapped to a single site with the parameters obtained by comparing to experiment.  Our group has developed a coarse-grained force field for simulations of lipids, peptides, and polymers.  The basis is the big multipole water (BMW) model.

The new BMW-MARTINI force field reproduces many fundamental membrane properties and also yields improved energetics (when compared to the original MARTINI force-field) for the interactions between charged amino acids with lipid membranes, especially at the membrane/water interface. The simulations emphasize the importance of a reasonable description of the electrostatic properties of water in coarse-grained simulations. 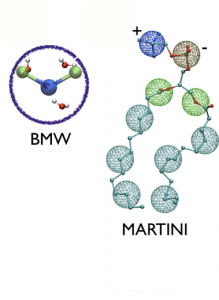