We use a number of supervised and un-supervised machine learning (ML) methods to study the phase behavior of complex fluids and the conformational properties of macromolecules.

An example is the convolutional neural network (CNN) model for the phase behavior of the Widom Rowlinson mixture and symmetric polymer blends.  In our implementation the co-ordinates are mapped onto a grid and the CNN is used to classify the configuration.  The neural network is trained with mixed and phase separated configurations (at high and low temperature respectively).  At other temperatures the network is used to predict the probability that a configuration is mixed.  The transition temperature is when this probability is 0.5. 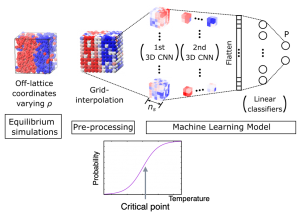 The method is quantitatively accurate when compared to traditional simulations, and we have used it to obtain the phase diagram of polymers in ionic liquids.

The CNN method described above is a supervised method: The network is trained on known phase points and used to classify unknown configurations.  This is similar to how one would determine if a picture was that of a dog or cat, based on a training of the net on known pictures.  Unsupervised methods do not require training but rather focus on how correlations within the dataset change with conditions, such as temperature.  We use both classes of methods in our work.

Principal Component Axis (PCA) is unsupervised method that does not involve any parameters or fitting.  It is used to reduce the dimensionality of the dataset by considering the so-called “principal components”.   A large data set, such as the positions of all molecules is mapped onto two linear and uncorrelated variables.  The t-stochastic neighbor embedding (tSNE) method is similar to the PCA but uses a stochastic algorithm to cluster points according to their distance to other points.

For the two-dimension Ising model, both unsupervised and supervised methods are accurate for the critical point.  In this model, each lattice point contains a spin that can take on values of either +1 or -1.  If neighboring spins have the same value, it contributes -J to the energy.  At high temperatures, the system is disordered, and it undergoes a second order phase transition at a reduced temperature of T=2.269.

The table below shows that all the methods are accurate, but the unsupervised methods are the most reliable.

We are using these methods to study the phase behavior in other systems, as well as the conformational transitions in macromolecules and the growth of dendrites in Lithium metal batteries.