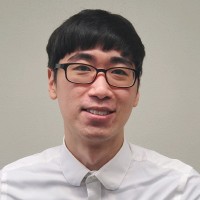 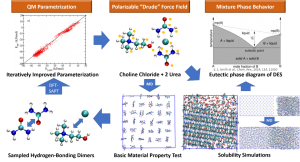 Deep eutectic solvents (DESs) are innovative functional solvents which succeed the desirable properties of ionic liquid (ILs) such as chemical stability, low vapor pressures, and additionally have fine tunability, lower cost and lower toxicity which can overcome the limitation of ILs in large-scale applications. DESs typically consists of an ionic compound and a neutral hydrogen bond donor (HBD) species, where intermediate compositions of these result in large melting point depression. Although the hydrogen bond of HBD with anions is now known as a key factor in this eutectic phase behavior, the relation between microscopic details and bulk properties is not fully understood.

We develop and import a first principle-based polarizable force field for choline chloride/urea DES in molecular dynamics simulation. Symmetry-adapted perturbation theory (SAPT) serves as the first-principle foundation in which the nonbonding interactions between the species are decomposed into physical components including exchange-repulsion, electrostatics, induction, and dispersion. We note that building a force field according to the SAPT component is a more physically motivated way to grant more transferable force field which can potentially serve well in complex systems with various compositions and phases. By considering the charge penetration effect and induction in our model, we aim our model achieves accurate description of charge polarization suitable for different hydrogen bonds in DESs, then ultimately becomes applicable for modeling phase behavior and interfacial systems.

Structural and Dynamical Characterization in Supramolecular Assembly of Ionic Surfactants 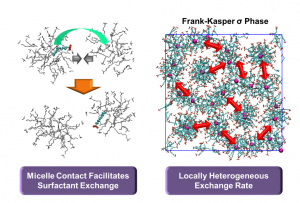 Surfactants (Surface Active Agents) consists of hydrophilic headgroup and hydrophobic headgroups that drive themselves into self-assembly in aqueous solution. The most primitive structure formed by the surfactant self-assembly is micelle, but at higher concentrations they can form various interesting morphologies of lyotropic liquid crystals (LLC) with patterns in nanometer length scales. Ionic surfactants have been reported to form supramolecular self-assembly by packing the spherical micelles further into ordered crystalline phases of low symmetry. The low-symmetry morphologies they exhibit motivate interesting questions about microscopic details inside the structure and the factors which preferentially stabilize this low-symmetry structures over other structures of higher symmetry.

We employ united-atom models for the surfactants to perform molecular dynamics (MD) simulations of the large unit cells of the supramolecular assembly for a substantial time scale. The structural and dynamical inhomogeneities are characterized, accompanying unique discoveries about molecular processes occurring inside which contribute to maintain the particular structures.

I am interested in developing and applying multiscale modeling framework to design soft functional materials which exhibit self-assembly and phase separation. I enjoy playing the piano for classical music and transcription of songs, and swimming for fun.